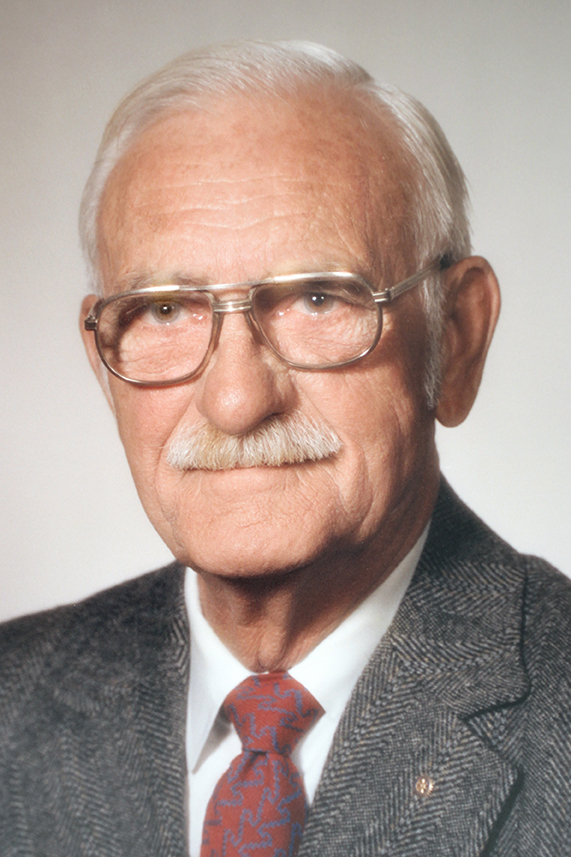 Mr. Badger, Community Leader
A member of the Class of 1925, was born in Kasyville, Macon County, Missouri. While at Tucson High, Boyd was active in the Glee Club, Band, HiY, Cactus Chronicle, Tucsonian, and Cheerleading.
At the University of Arizona, Boyd majored in Business Administration. His freshman year he served as a cheerleader, his sophomore year found him singing in the Glee Club, and when his junior year rolled around he was manager of the varsity track team, a member of student council, captain of Scabbard and Blade, and on the business staff of the Wildcat. After taking time out of school to work, he returned to serve as president of his senior class, director of the 1930 Senior Follies, and president of the University Players. His college was capped off by his election to student body president.
In 1931 Allen went to work for American Airlines, working for them in Tucson, and Shreveport, LA. He then spent four years with General Electric as sales manager in various territories near New York. He joined the John Manville Corporation in 1937. In that time he had risen from salesman through the ranks of special representative, unit manager, staff manager, to his position as sales executive. He was responsible for the marketing and design of all Johns-Manville asbestos roofing and siding products. It was his duty to determine the future public demand for the products and to set the production quotas.
Boyd entered military service in 1942 as a first lieutenant in the Corps of Engineers in Washington. He was transferred to the Brooklyn Army Base, New York Port of Embarkation, in the same year, where he was promoted to captain. In 1943 he attended the Command and General Staff School at Fort Leaven worth and in 1944 was assigned to Camp Shanks, New York, as control and Planning Officer. His promotion to major came in 1945 just before he left for Manila, where he served until his discharge in 1964. Boyd stayed very active with the reserves.
As the University grew there was the ever greater need for those who had loyal ties to bring their enthusiasm to bear in supporting the progress of this great institution. The Alumni Association and the University of Arizona were grateful for the support and work that Boyd Allen did. He was the recipient of the Alumni Service Award.
After 1958 Boyd’s business career landed him in areas of audio visual equipment and real estate. His Civic activities included the Governor’s Civil Defense Advisory Council, Director for the Southern Arizona Emergency Resources Planning, Political Action Committee, Botanical Gardens, and Board Member of the Tucson High Badger Foundation.
Boyd’s affiliations include Rotary International, The Military Order of World Wars, Arizona Sonora Desert Museum, Arizona Historical Society, Bushmasters Association, 1957 Founding President of Southern Arizona Chapter of the Association of U.S. Army, Society of American Military Engineers, Secretary/Treasurer of the Pacific Student President’s Association and the Wildcat Club just to mention a few.
Boyd’s family includes his wife Mary and his four daughters: Mary Katherine, Barbara Grace, Pauline, and Nancy Jo.
Boyd Allen is truly wonderful and generous alumni. He’s been a support and friend to all of us. Congratulations!