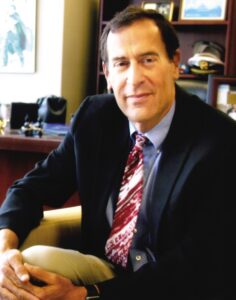 THS provided inspiration for all that followed during Dr. Rob Breiman’s career. He was Student Body Vice President, engaging him in social justice and equity issues, ever-present at that time, and forming the foundation for his later work. To this day, during speaking engagements, Rob conjures up the guidance of legendary speech coach Ed Markert, who helped him overcome stage-fright to win many state-wide tournaments. While always a Badger, Rob was a proud Wildcat, graduating in 1975 “with highest distinction” and from the School of Medicine in 1979. Following training at UCLA, he served in major leadership roles with CDC for 26 years. He was Director of the National Vaccine Program Office which oversaw all US government vaccine programs.

Rob directly impacted diseases and mortality of people living in impoverished settings in Africa and South Asia. He built an infectious diseases program at the acclaimed International Center for Diarrheal Disease Research in Dhaka, Bangladesh, where he and family lived for 4 years. He was the first Director for CDC’s emerging infectious diseases program in Nairobi, where he lived for 9 years. He built a world class surveillance system and clinic serving the disadvantaged in Kibera, Africa’s largest informal settlement.

He led outbreak responses for CDC and the World Health Organization during many high-profile outbreaks, including Hantavirus, SARS, Nipah Virus, and Rift Valley Fever. As WHO SARS team lead in China, he was a daily fixture on television and print.

Rob was Director of Emory University’s Global Health Institute from 2013-2020, where he is a tenured Professor of Global Health and Infectious Diseases. Until 2020, he was Executive Director of the Child Health and Mortality Prevention Surveillance program to study and prevent child mortality, receiving the largest Gates Foundation research grant to-date.

Rob was elected to the prestigious National Academy of Medicine, one of the highest honors in medicine, as well as the exclusive American Epidemiological Society. During the pandemic, he was Chief Science Officer of the Global Health Crisis Coordination Center. He co-hosts the podcast, GHC3 Talks. He has authored over 430 scientific papers and a book.

Rob’s work is not finished. He will lead a new, innovative Infectious Diseases and Oncology Research Institute at the University of Witwatersrand in Johannesburg, South Africa, with an appointment as Distinguished Professor.