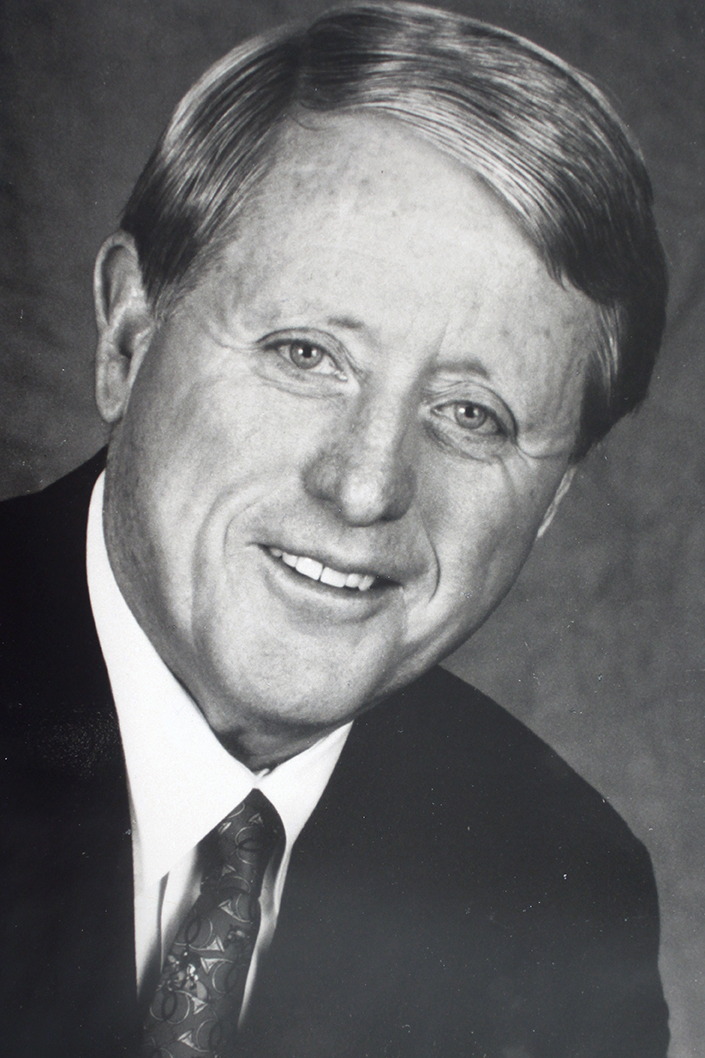 Burton “Burt” Kinerk has enormous love for his family, community and profession. He knows how to work, serve, and play with enthusiasm and integrity. Burt, a native Tucsonan, was born to Anna Marie Blow and Daniel Kinerk. His father began working for Varsity Cleaners in the 20’s and eventually became the proprietor. Burt has two younger siblings, Daniel Martin and Susan Ann Kinerk Trujillo. Burt received his early education through the ninth grade at Saints Peter and Paul School, continuing on to Tucson High (class of ’53). In 1957 Burt received a B.S. In Business administration from the University of Arizona. And in 1962, he both graduated from the College of Law and was admitted to the Arizona Bar. He served as a 1st Lieutenant in the U.S. Army from 1957 to 1959 as a paratrooper, Intelligence Division, 18th Airborne Corps.

From the beginning of his high school years, he was a “player.” As a sophomore, he was on the basketball and baseball teams as a “cub” and served on the Pep Squad. Burt put his leadership skills into practice by serving on Junior Council and Senior Cabinet. He also was a junior guard. He lettered both in his junior and senior years. He can proudly remember having been a member of the varsity football teams that won the state championships two years in succession. His appreciation for the arts was demonstrated when he joined the dance committee and the Balladeers, which was under the direction of Madge Utterback.

Burt served as UA freshman class president and joined the freshman and junior varsity baseball teams. He is a U of An honorary letterman. He joined Sigma Chi Fraternity and is a Life Loyal Sig. Burt was a recipient of the Pima County Bar Association Auxiliary’s scholarship and is in Who’s Who in American Colleges and Universities. He is a member of Blue Key and a Sterling member of Who’s Who, executive division.

Burt married Nancy Burton Kinerk in August 1961. They had four children. Colleen is a lawyer, Kevin is in banking, and John is in the hotel business. Daniel, their oldest son, was killed in a construction accident during the summer of 1980. Burt and Nancy are blessed with three grandchildren, a boy Cole and girls Aidan and Cameron.

Greg Hansen, Arizona Daily Star sports columnist, in a June 1994 article refers to Burt as “Mr. Tucson.” “He’s a born, bred, raised, authentic, always-and-forever Tucsonan.” Former UA athletic director Cedric Dempsey said of Burt, “Without Burt Kinerk, there is no Copper Bowl.” He also has been instrumental in retaining spring training baseball in Tucson. He is a dedicated volunteer, having given of his time and knowledge to Boys Clubs of Tucson, Boy Scouts of America, YMCA, Tucson Conquistadores, Kino Learning Center, Southern Arizona Livestock Association, U of A Foundation and President’s Club, Catholic Foundation of the Diocese of Tucson– among others. He has served as president, vice president, treasurer, secretary, and as a member of boards of governors for various professional and community organizations.

When Burt was selected and honored by the Tucson Metropolitan Chamber of Commerce as Tucson’s Man of the Year for 1996, he said he was overwhelmed. He was really almost lost for words. But right quickly, with that Irish twinkle he often gets in his eyes, he said, “I challenge everyone in our community to become involved in volunteering. “Yes. . . Mr. Tucson is always thinking about what it takes to best serve the community he loves.