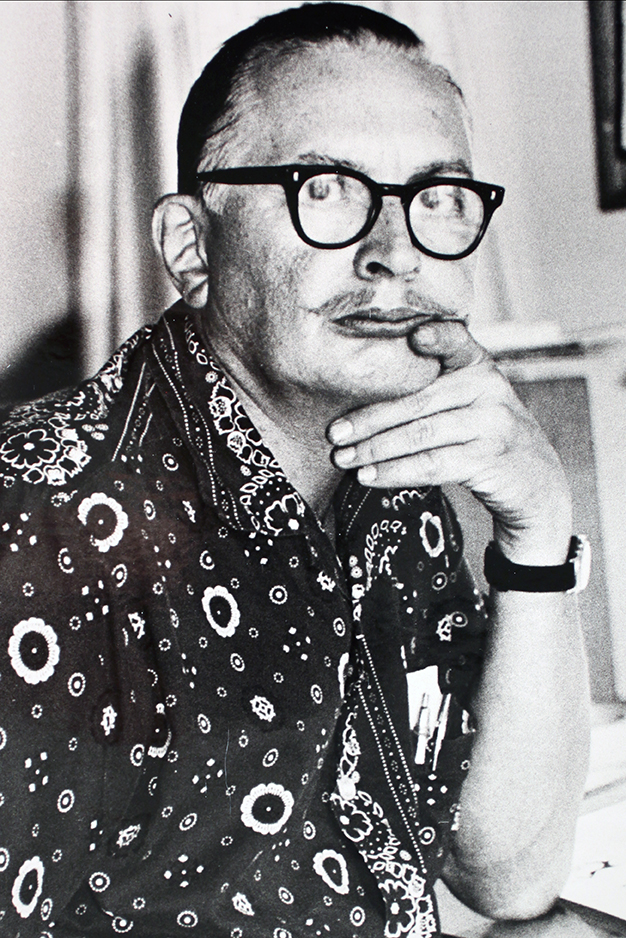 Aka. “VIP”. Internationally known cartoonist was born October 17, 1916 on St. Paul Island, Alaska. The Partch family became residents of Tucson around 1930, and Virgil entered Tucson High in 1932. He participated in sports, was on-staff of the CACTUS CHRONICLE Newspaper and TUCSONIAN yearbook, and gained some distinction for poster work in the “SIGN SHOP” art class of Ms. Otille Buckner. He graduated with the class of 1935, in 1936 Virgil attended the U of A, played football under J.F. McKale, and became recognized for cartoon contributions to the campus humor magazine, The ARIZONA KITTY KAT.
In 1937 Virgil traveled to Southern California seeking employment in animated films. He was hired by Disney Studios as an office boy. In 1938 he was promoted to the position of animator, and in that same year Virgil Patch and Helen Aldridge were married by a Justice of the Peace in Tucson. Labor trouble came to Disney Studios in 1941, resulting in a strike. Following the settlement Virgil and other employees were discharged for participating in the walkout. Virgil and Helen Partch are now living on unemployment checks. Encouraged by friends Virgil submitted cartoons to national magazines. His first sale was to an editor of COLLIERS magazines and this was followed by sales to SATURDAY EVENING POST. LIBERTY and THIS WEEK.
Military service came in 1942. Due to his poor eyesight the Army placed Virgil on limited service; he served as an “Anti-Terrorist Instructor” while contributing to military publications. He also furnished cartoon ideas (gags) to ESQUIRE and NEW YORK magazines. Virgil was becoming nationally known as a cartoonist. The NEWSWEEK issue of June, 1943 called attention to his work stating, “Call him VIP!” In less than one year and a half Virgil Franklin Partch II has risen from recipient of unemployment insurance to a top flight cartoonist. TIME MAGAZINE REPORTED IN July, 1944 ‘Virgil Partch is nuts… but in a nice American way. A fresh brand of humor based on a slam-bang explosive brand of fantasy!” Following WWII Virgil increased his cartoon to national magazines including LOOK, TRUE AMERICAN LEGION, PLAYBOY, COSMOPOLITAN, MEDICAL ECONOMIC NEWS, PUNCH (ENGLAND) and MCLEANS (CANADA). He published more than a dozen popular cartoon books in hardback; some of these were transcribed into foreign languages and distributed internationally.
In the 1960ís Virgil’s career reached a high point, His cartoon strip “BIG GEORGE” was syndicated and published in more than 300 newspapers nationwide. For a U of A Alumni Association Fund Raiser. J.F. “Pop” McKale wrote to Virgil, “…you are the only nationally known cartoonist in the Alumni Association … can you help?” Fred Stoff, Chairman of the Alumni Fund Drive acknowledged Virgil’s contribution with a postscript, ‘This cartoon was drawn especially for his letter by the famous cartoonist, Virgil Partch, an Arizona alumnus!” Virgil Franklin Partch II was listed in the 42nd edition. Of WHO’S WHO IN AMERICA” and in volume 108 of CONTEMPORARY AUTHORS. Virgil and Helen Partch died in a tragic freeway accident in Southern California. Aug 12 1984. They are survived by daughter, Anna (Partch) Couch, two sons Peter and Nicholas, and several grandchildren.