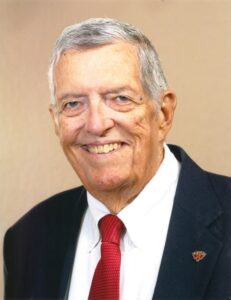 Richard Bierce, spurred by an architectural drawing class at THS, went on to become a leading figure nationally in the preservation of historically significant structures. Bierce (Class of 1962) began a lifetime of volunteer service as manager of Badger football and basketball teams. He wrote for the Quarterly and Chronicle and was in the National Honor Society. He graduated in architecture from the University of Arizona, and earned a master’s degree in architecture from Columbia, where he was among the earliest graduates to receive a certificate in preservation. He and his wife, Violet, became Peace Corps volunteers in Brazil, where he applied his architectural training in Brasilia and Rio de Janeiro. Returning to Tucson, he was hired by an Alexandria, Virginia firm to prepare for the nation’s Bicentennial in 1976. There, Bierce supervised restoration of historic Gadsby’s Tavern, which had been patronized by George Washington, Thomas Jefferson and other Founding Fathers. Later, as senior architect for the National Trust for Historic Preservation, Bierce managed the acquisition and opening of Montpelier, the home of President James Madison, known as “Father of the Constitution.” After Hurricane Hugo, he worked in Puerto Rico and the U.S. Virgin Islands to assess damage, consult with owners and save buildings that could be stabilized. In 2017, he received the Award for Distinguished Achievement from the Virginia Society of the American Institute of Architects. The award citation praised him as a “quintessential historical architect…and a citizen architect who generously shares his expertise.” Among his pro bono work, he served for 33 years on the Architectural Review Board of Fairfax County. He has taught or mentored students at four universities, directed Boy Scout activities and held many board leadership positions in his church, both local and national. Bierce credits THS teachers for inspiring and preparing him for his career. He’s served on the Badger Foundation Board since 2019. Earlier, he co-chaired a fund-raising campaign from Class of 1962 classmates to award scholarships to Pima College for THS graduates. Among other local activities, he’s been invited to serve on the Leadership Council of the nonprofit San Xavier Patronato.