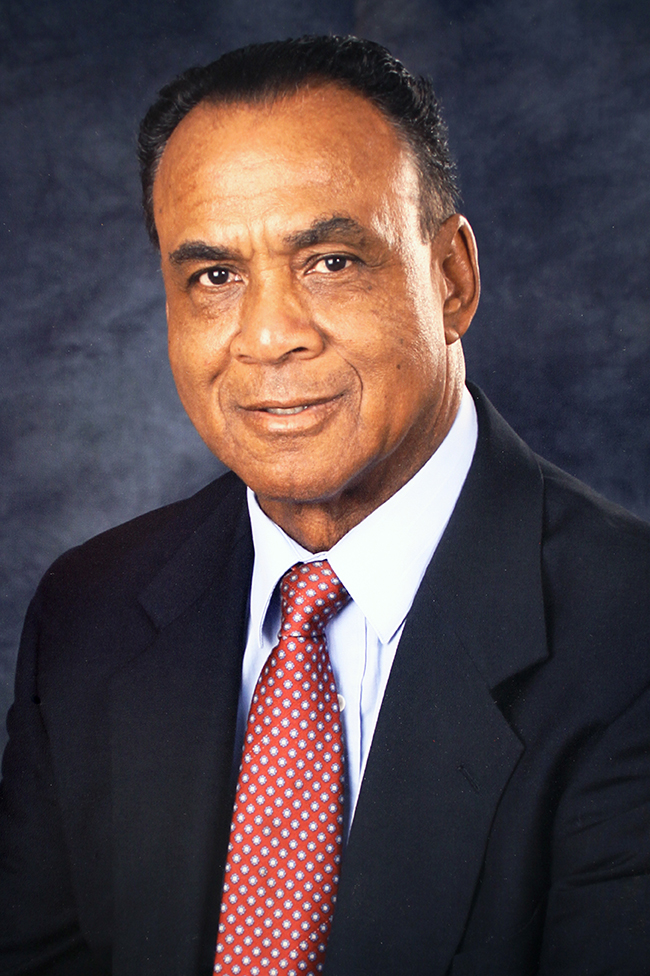 Morgan Maxwell, Jr., was born in Okmulgee, Oklahoma and moved to Tucson from Topeka, Kansas in 1940, when his father became principal of the all-black, segregated, grades one through nine, Dunbar School. In his 1988 autobiography, Morgan’s Tucson High football teammate, Frank Borman, recounts the story of the day, in October 1944, that Tucson High beat Douglas High 20 to 0. After the game, the THS team went to the Gadsden Hotel and sat down to eat dinner. The hotel manager told Morgan that they did not serve Negroes so he could not eat. He had no choice but to leave. He left the hotel with silent dry tears and, a few minutes later, he looked back to see Coach Gridley leading the entire team outside, having said, “We all eat together.” They all boarded the bus and went to a nearby park and had a picnic of soft drinks and sandwiches. For years mr. Maxwell shared that incident with African-American men in his age bracket, who nearly always would comment that he must have been a good football player. Mr. Maxwell says he nearly always saw the same expression in their eyes when he told them he was a second string lineman, who only played the final two minutes of the game, and was not a letterman until his senior year. Mr. Maxwell consistently visited Coach Gridley and thanked him until Grid died on August 8, 2000 at the age of 96. Mr. Maxwell graduated from the University of Arizona in 1949 with a major in Finance, served in the Army from 1950 until 1952 and received his MBA in Finance from the University of Southern California in 1955. After spending two years at New York University and teaching at historically black colleges, he moved back to Tucson in 1961 and primarily engaged in real estate residential appraising. In 1967, Mr. Maxwell was appointed to the post of Deputy State Treasurer by Charles Garland, Arizona’s first Republican State Treasurer. He was the first black in Arizona to become a designated and approved fee appraiser for both the Veterans Administration and Federal Housing Administration. He served as Chairman of the State of Arizona Civil Right Commission under Governors Goddard and Williams. He served two terms as a member of Tucson’s Civil Service Commission. He also built the first house under the FHA 235 housing program in the Dunbar-Spring neighborhood. He is a life member of the NAACP and the Tucson Association of Realtors. In 1987 he started the Tucson Chapter of the National Stuttering Association, which is committed to helping the lives of both children and adults who stutter, and he is the Tucson Chapter Facilitator of the monthly meetings. Since 1991, he has conducted workshops throughout the country at the annual National Stuttering Association Conference. Mr. Maxwell’s blended family consists of his wife, Ingrid, along with three sons and two grandsons. His retirement has been steadily busy with his work as the treasurer of the Dunbar Coalition Inc., which is dedicated to restoring the Dunbar School site with plans to turn it into a Museum and Cultural Center for African American history of Southern Arizona.