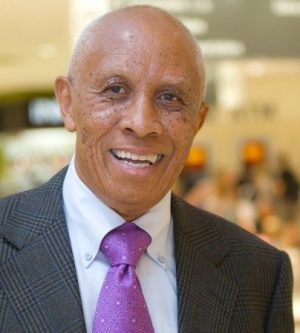 Mack Wilbourn, a native of Magnolia, Arkansas, is a graduate of Tucson High School’s class of 1962. He attended the University of Arizona where he majored in Public Administration.  He is the owner and President of Mack II, Inc., a fast food management company. His current franchises (since 1996) include Popeye’s Chicken & Biscuits, Checkers Hamburgers, Phillips Seafood, and Edy’s Ice Cream all located in the Hartsfield-Jackson Atlanta International Airport. His two Popeye’s chicken locations have ranked numbers one and two in the world.  His Checkers Hamburger location ranked No. 1 in Sales in the Checkers/Rally system worldwide. Mack is also the Managing Partner of MWJ, LLC, a Coca Cola vending company in Atlanta.

On June 15, 1971, he became one of the first minority McDonald’s franchises in the Atlanta area. His four McDonald’s restaurants provided employment for 150 employees who he trained and mentored to excel in the business. Mack has had many entrepreneur arrangements with Underground Atlanta, government, and corporations. He maintained his Tucson entrepreneurial connections by working with Laura Banks, of Jacks BBQ.

Mack earned Minority Business Entrepreneur (2002), Franchise Update’s Area Developer (2004), and Automatic Merchandiser (2008). He was awarded the “2011 Corporation of the Year” by the Atlanta Business League. He has served on the boards of the Atlanta Business League, Butler Street YMCA, the Urban League, The NAACP, Zoo Atlanta, The Martin Luther King Jr. Center, The National Black Arts Festival, Brain Injury Association of Georgia, the High Museum and Center for Puppetry Arts, and Local Advisory Board of branch Banking and Trust.

At Tucson High and still today, he is a catalyst in helping elevate the lives of others through his employee development programs, serving in community and business organizations and providing numerous scholarships to youth employees and youth organizations. Mack has been a resource to Mayor Maynard Jackson, President Barack Obama, Ambassador Andrew Young, and others who value his contributions to the not so fortunate. Mack is a highly successful entrepreneur who made it from “the cotton field to the corporate field”, and he is an exemplary example of a Tucson High Badger.

He has two sons, McKenzie and Marquis.