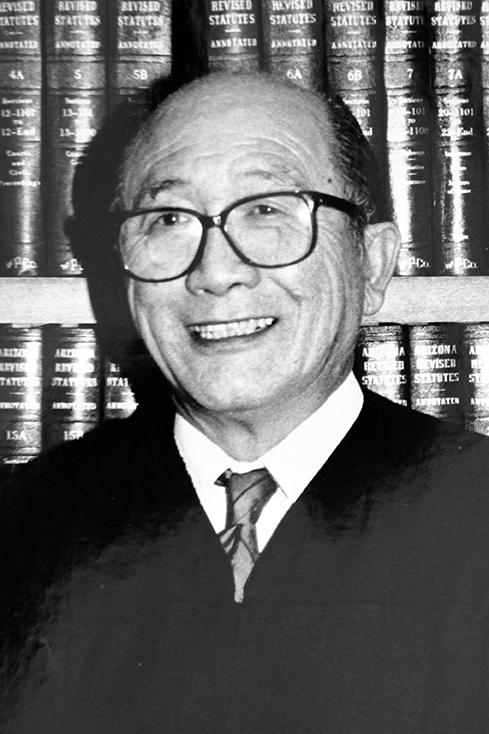 Was born in February 19 1927, in Tucson is one of four children of B.S. Gin and Lee B.K. Gin who owned and operated “Gin’s Market” the neighborhood grocery store at 3rd Ave. and 17th Street. Not content to be a neighborhood grocer. Harry excelled in the classroom, He attended Safford Elementary and Junior High Schools, Tucson High and the University of Arizona, and after graduating with Phi Beta Kappa Phi honors, he was accepted to Harvard University where he received his law degree in 1952. He returned to Tucson, was admitted to the State Bar that same year and with the exception of 1959 when he was a Deputy County Attorney, he was in a private practice during the next twenty years. In July of 1975 he became Judge of Pima County Superior Court Division 14, but not before serving his community as a Magistrate in Tucson and South Tucson City Courts, a Superior court Commissioner, Judge Pro Tem and Juvenile Court Referee.
Harry is a member of the American Bar Association, is a past Secretary Treasurer and President of the Pima County Bar Association, was a member of The Board of Governors of the State Bar of Arizona and he has served on the Board of Directors of the Pima County Legal Aid Society. His involvement in the community, however, has not been confined to the legal profession. He is a past Treasurer of the County Democratic Party Central Committee; he has served on the boards of Una Noche Plateada , Tucson Southern Counties Mental Health Association, and the Tucson High Badger Foundation, was the president of the Tucson Youth Board, in the United Community Campaign, the Tucson Community Council, the Committee for Economic Opportunity, the Southside YMCA, The Conquistador Kiwanis Club, the Tucson Community Council 12 Month School Study Committee on Mental Retardation, the South Tucson House Authority, and as member of the Tucson Chinese Chamber of Commerce.
Harry and his lovely bride, the former Bernice Chin, who also has been and continues to be very active in community affairs, managed to find time to become the proud parents of Susan and Nancy, who are the graduates of the University of Arizona Medical School and are practicing physicians, of Patricia and artist and of Stephen, who is completing his college education. On the bench a serious and attentive figure, off the bench Harry is a very personable, well liked compassionate man with a wonderful sense of humor who has not forgotten his hometown roots and has unselfishly given a great deal to his community. He is a model for our aspiring youth to emulate and is most deserving of this recognition.