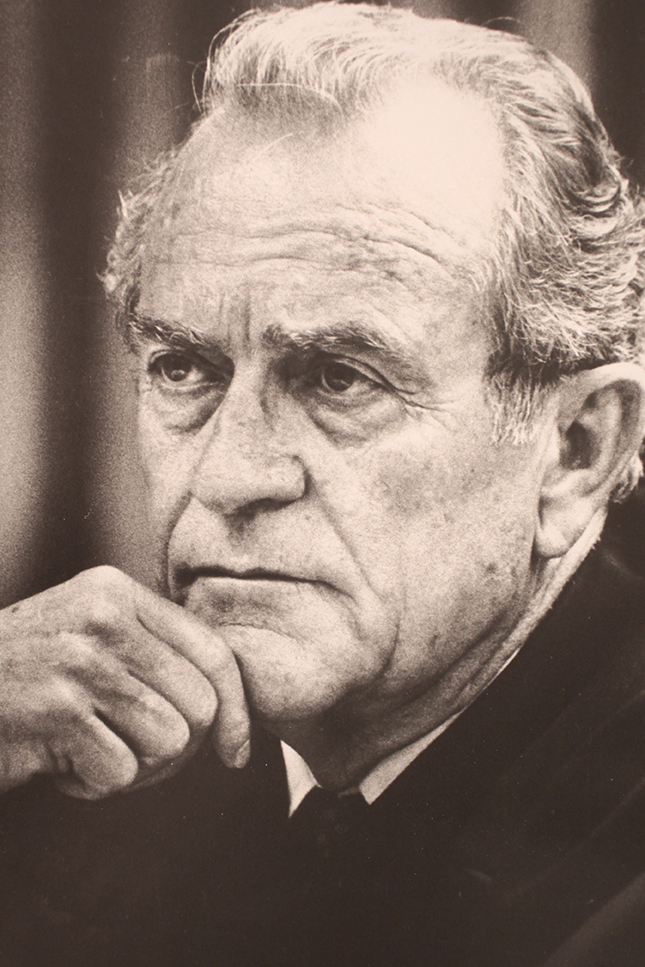 On his July 19, 1978 swearing-in to the Superior Court bench he said: “It’s a satisfying way to finish out a legal career. . . Not bad for a kid born in Menlo Park, huh?”
He was born on May 1, 1932 at the Stork’s Nest, where the Transamerica Building stands today. He attended University Heights Grade School and Mansfeld Junior High and graduated from Tucson High in 1950. Pals at the time who also went on to a legal career are Stanley Feldman, now an Arizona State Supreme Court Justice, and Mike Lacagnina, now a State Court of Appeals Judge. Meehan bagged groceries at Consumer’s Market. Following graduation, he was in the submarine service during the Korean War, 1951-55.
His formal legal education at the U of A was undergraduate work in Correction Administration 1957-60, and his LLB from the College of Law in 1964. But there is no doubt that his experience as a state highway patrolman (1955-61) and as state liquor enforcement agent (1961-64) also prepared him for his years on the bench. He was in private practice for several years and a special court commissioner, Pima County Superior Court (1973-77). He became Judge Pro Tempore in 1978 before the appointment as Superior Court Judge. He was named Presiding Judge in January 1985, with administrative duties over 21 divisions.
Meehan was known for his common-sense approach to the law, a congenial mix of wisdom, wit and ornery intolerance for the starched formality that dominates many court rooms. A 1985 photo in the Citizen shows him frowning, cheek resting on hand, bare arm protruding from the sleeve of his robe. The article is headed: “Judge Meehan demands that jurors dress properly.” He was described by colleagues as a “man’s man” who grounded his legal rulings in a sensibility linked to his love for the Old West– an affection evidenced by the life-size cardboard cutout of John Wayne that stood in the corner of his office.
Among his notable cases: In June 1981, Meehan, a Democrat, ruled that four Tucson City Council members, also Democrats, did not violate open meetings laws by discussing the firing of a police chief in a closed-door session. In 1982 he acquitted a mentally ill woman in the shooting death of a local disc jockey. Both tough and empathetic, he sentenced a child molester to 2975 years in prison (the defense attorney later got the sentence reduced to 2865 years); later the same week he placed on probation a blind man who had murdered his mother in a psychotic fit. In 1984 he dismissed rioting and assault charges against 19 members of the Christ Miracle Healing Center and Church following the melee in Miracle Valley.
He was never hesitant in speaking his mind or making a controversial ruling, but he said he was sometimes uncomfortable with his position of power. “Who the hell am I to sit and decide what happens to somebody’s life? You’re deciding someone’s future and you wonder what makes you different from anybody else. And you know you aren’t different from anybody else.” He liked to say he became a lawyer because he was never very good with issues that had right or wrong answers. He had no regrets. He died on October 19, 1993 at the age of 61. He had two sons, Vincent and Michael.