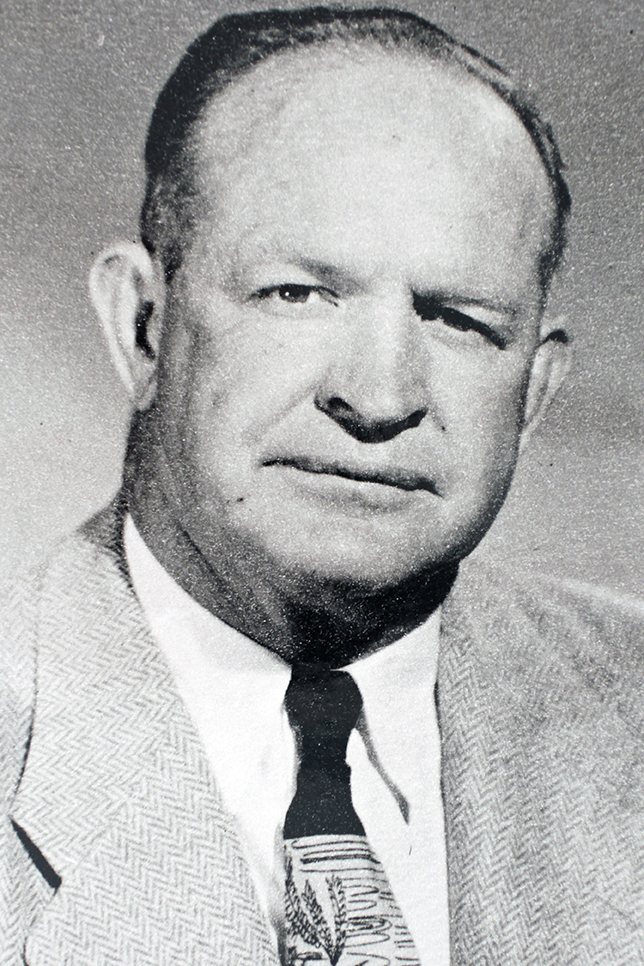 Universally known at THS as “Red” and affectionately called “Bunny” by the more adventuresome boys in his Physical Education Classes, was born February 4, 1910 at Marianna, Arkansas. The “Bunny” tag came from two or more sources, take your choice. At that time the THS Physical Education staff “brown bagged” their lunches and Jason always included two or more carrots. Also for a time he taught agricultural classes and in the east basement his FFA group raised rabbits. He was always outstanding in the field of athletics. At Marianna High School he earned four letters in basketball; three in football, playing tackle and center, but named All-State right end in his senior year; and two in track.
He was an All-State college tackle in 1930 in junior college at Arkansas A & M. Magnolia, Arkansas where he played two years of football and basketball.
Jason came to the University of Arizona in 1931 and for ’31, ’32, and ’33 was All Border Conference right end. At the University of Arizona he won three letters in football and two in baseball. In football, J.F. “Pop” McKale often referred to Jason as “half a line” since he was able to take care of everything that came his way. He played two years of baseball as a catcher and outfielder. From 1934-35, he coached his alma mater Marianna, Arkansas High School. From 1935-36, Jason coached at Prescott High School.
In the fall of 1937, Jason came to Tucson High School as a physical education instructor and Boys Tennis Coach. As the tennis program grew in the State his charges always ranked high in the competition. He coached the Cub football team until 1943 when he became an Assistant Football Coach. The 1948/1049 school year found him as head football coach following R.T. Gridley’s retirement from this position. In 1956 he gave up the position of head football coach to assume a new role demanded by the expansion of the school district, that of Athletic Director for Tucson High School. Red was active in community service including teaching Sunday school, doing youth work and being an ideal adult role model for the First Baptist Church.