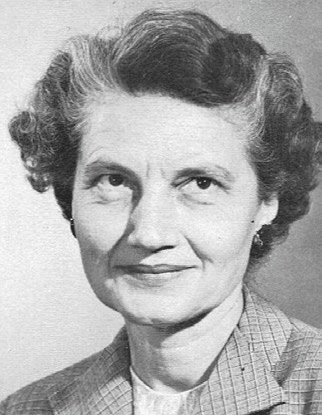 Harriette R. Martin taught at Tucson High for 38 years and was devoted to her students. She was loved and respected not only for preparing students in English and journalism but also for  inspiring confidence in them to follow their dreams. When Miss Martin died in 2000, she left behind legions of former students who were profoundly influenced in their life paths by her. Among them was the late writer Charles Bowden, who called Miss Martin “an extraordinary teacher who touched my life and many others.” Bowden recalled that astronaut Frank Borman respected Miss Martin so much that he returned to speak to her class.

Born in 1907 in southern California, Miss Martin received her B.A. from UCLA and master’s from the University of Arizona. She taught English at THS from 1934 to 1972 and was named Tucson Woman of the Year in Education in 1959. As the THS journalism teacher, she became adviser to the Cactus Chronicle in 1943. While she advised the school paper for those 28 years, its staff consistently won high national awards from Columbia University’s Scholastic Press Association. She twice received the association’s Gold Key award for excellence in teaching journalism. She also served as the Quarterly’s adviser for many years and was honored by the Quill and Scroll Society.

She taught students to express themselves clearly in writing and speaking. With her guidance, many became journalists or authors. The UA’s School of Journalism recently inducted 14 individuals into its Hall of Fame. Four of them were Miss Martin’s former students – UA Journalism Professor Donald Carson, pioneering environmental reporter Jane Kay, Associated Press  correspondent Mort Rosenblum, and Frank Sotomayor, who co-edited a Pulitzer winning series. Other journalists who credit Miss Martin for putting them on the media career track include Edith Sayre Auslander and Tom Foust.