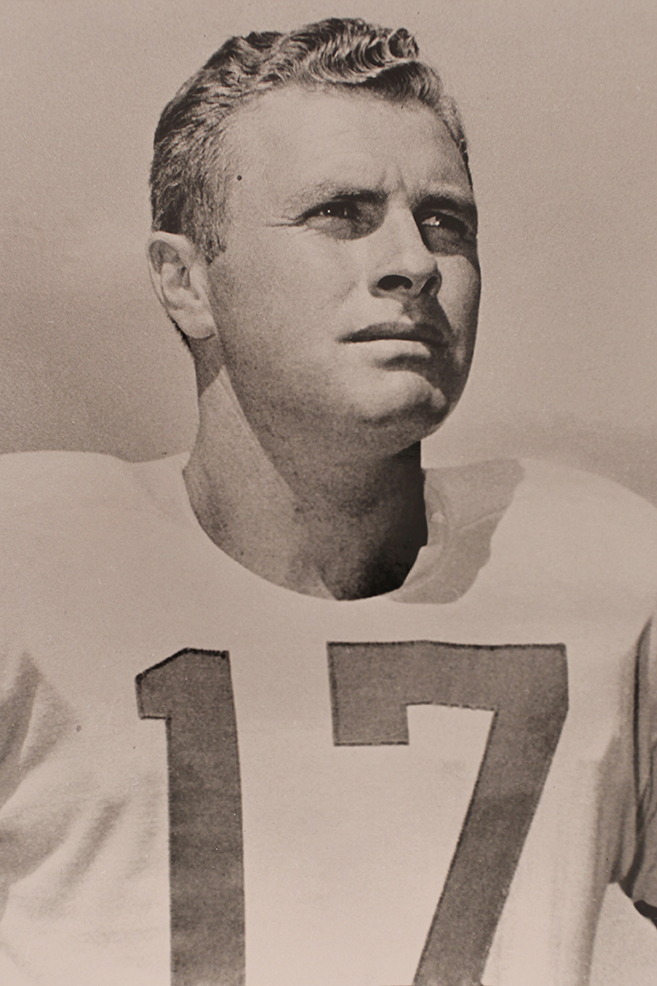 Was born in Louisville, Kentucky in December 15 1924. His parents were the legendary Fred A. Enke of U of A basketball fame and Ollie Charlene Enke. He attended University Heights and Sam Hughes before graduating from THS in 1943 to 1946 he was a WW II Naval Aviator. In 1946 he matriculated at the U of A where he was likely one of the most talented athletes to have ever graced the U of A campus. He lettered two years in football under Coach J.F “Pop” McKale, three years in Basketball under his father, and also under Pop McKale in baseball. In 1947 he was All American and All Border Conference quarterback setting a U of A record for total offensive yards with 2,973. This multi-talented athlete helped lead the U of A Border Conference basketball tiles in the three years he played and in 1948 captained the championship team in baseball he helped lead the team to records of 10-3, 15-4 and also in 1948 captained the team. After this highly successful college athletic career, Fred went to spend seven years in professional football. He played quarterback for the Detroit Lions for four years, the Philadelphia Eagles for one season and the Baltimore Colts for two years before returning to Arizona, during the off-season Fred completed his Bachelor’s Degree in Education and earned a Master’s Degree in Administrative Education.
In 1952 he married Marjorie Berg THS ‘49 and they have four children; Debbie, Diana, Denise and Fred W. Enke Jr. In 1952 the farming business became the Enke lifestyle. The same dynamism he showed in athletics made him a leader in the cotton growing industry. He has served as Chairman of the Arizona Cotton Growers Research Committee, Chairman of the Arizona Cotton Growers, Director of Calcot Inc. a trustee of the Cotton Producers Institute and delegate to the National Cotton Council. He was also named as a Man of the year in Arizona Agriculture. An extremely active U of A supporter, Enke was elected to the U of A Sports Hall of Fame in 1976. Currently semi-retired, Fred resides in Casa Grande, and plays as much tennis “as the body can stand” it must be able to stand a lot as he is a nationally ranked in his age group. Red is a ride and inspiration for all Badger grads and a true role model for all currently attending Tucson High School.