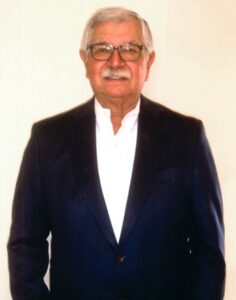 Eduardo (Eddie) Leon was raised in Barrio Hollywood in Tucson and went to junior high school at John Spring Junior High. Eddie was an extremely good student and leader at Tucson High School, being elected to both Junior and Senior Class President.

After high school, Eddie attended the University of Arizona on a full-time baseball scholarship and developing an interest in engineering and finally choosing it as long-term goal for his profession and major.

After his third year of college baseball, Eddie was drafted by the Cleveland Indians. Now 99% of those with Eddie’s background would have jumped at the chance to play pro baseball and take the bonus money. But Eddie was beyond playing professional baseball and was involved in obtaining his engineering degree, playing one more year for the Wildcats allowing for his graduation in 1968 with a Bachelor of Science Degree in Civil Engineering “With Distinction”. He would eventually use his engineering education for real estate development purposes, but not before he went on and played eight seasons in the major league, Number one draft selection, playing for Cleveland Indians, Chicago White Sox and New York Yankees.

Eddie served as director of the Badger Foundation a long time ago, as well as on the T-Club Board a few years ago. He also served as a committee member of the TUSD “Blue Ribbon Committee” and oversaw the sale of bonds to construct, among other facilities, the Tucson Magnet High Schoolʻs parking garage.