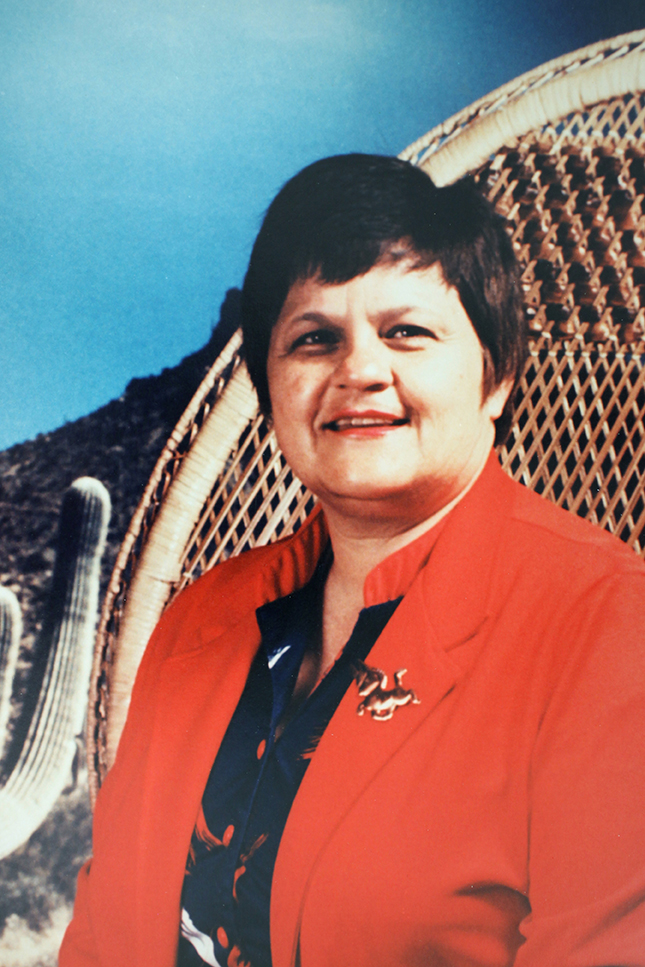 Number Six is an important number to Diane, She is the sixth child in a six-children family (she was born after her twin sister Dina), and she is a sixth-generation Tucsonan.
Her brothers and sisters, all Tucson High graduates, include: Gilbert Jr, former THS principal and also a Badger Foundation Hall of Fame Honoree; Louis, retired Tucson Fire Department Battalion CHIEF; Edna Carrillo Gabusi, a local banker; twin Dina Carrillo Bolle, a librarian. (The other sister, Stella, died at an early age).
Diane’s parents, the late Gilbert and Amalia Aguirre Carrillo, were both THS graduates, Class of ‘23 and ‘25 respectively. Gilbert played football for Pop McKale (yes, he coached at THS first), and Amalia played in the orchestra.
With this background, how could Diane do anything but excel, and excel she has, in education and sports. She has countless achievements in both fields herself, and continues to pass on teachings and encouragements to youth, specifically, and the community as a whole.
She is currently principal at Peter Howell Elementary School, her position for the last five years; before this she served as principal at Laura O. Gale Elementary (1983-91) and Miles Exploratory Learning Center (1982-83) and she was Dean of Students at Santa Rita High School (1980-82).
Diane received her bachelor’s degree from the U of A in physical education, and her master’s in secondary education administration. Sports dovetailed with teaching positions. For more than ten years (1969-80) she taught physical education at Wakefield Junior High and was also volleyball coach, girls’ basketball coach, girls’ gymnastic coach, overall intramural director. Her teams racked up the championships: 92 wins, 8 losses, 2 perfect seasons, four city championships—just for girls’ basketball: 1971 gymnastics championships for individual balance beam and floor exercise; four city championships for modern dance.
In her spare time, she has written a Golf Rules Crossword Puzzle for the Golf Rule Book of the National Association for Girls and Women Sports; she was chairman of the TUSD Sports Committee for Girls (1975-79)
Five years ago she was chairperson of the Arizona-Sonora Bike Race and was honored by the Sonoran government for contributions to bike racing and other sports in Sonora. She was also vice-chairperson of the local baseball committee that recruited the Colorado Rockies to Tucson for spring training. She is currently chairperson of the Pima County Sports Authority—the first woman in the United States in such a position.
Her educational achievements, along with her continuing community endeavors in sports and health, make Diane an awesome inspiration for countless youngsters in southern Arizona.