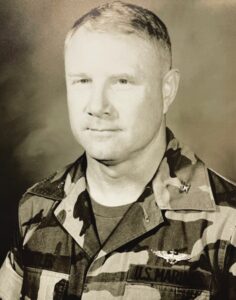 Col. Butler served the Marine Corps for 30 years including 2 years of combat duty in Vietnam as a helicopter pilot between 1969-71. He was primarily a flight leader and mission commander, logging 4900 hours in several types of aircraft. He was awarded an impressive array of medals for his outstanding service including the Legion of Merit (with Gold Star), Distinguished Flying Cross, Combat Action Ribbon, Purple Heart and most significantly, 108 Air Medals, which reflects over 2100 combat missions, more than any Marine Corps aviator in Vietnam.

His undergraduate and graduate education include a BA and MA in Economics at TCU and an MBA at Pepperdine. Military studies included the Marine Corps Command and Staff College and the Naval War College where he graduated with “Highest Distinction.”

His command billets included a two-year tour as the CO of HMM-268 at MCAS Tustin, Ca and a two year tour as the CO of Marine Air Group 26 at MCAS New River. His Air Group had 10 squadrons with 3500 Marines and 165 aircraft (today’s value is $666,000,000). It had the highest operational and maintenance readiness of all Marine Air Groups for two years under Colonel Butler’s command.

Retired in 1997, Mike has worked 20 years with the Office of Naval Research which is responsible for Science and Technology for the Navy and Marine Corps. Mike works in the Department that works on S&T for Command, Control, Communications, Computers, Surveillance and Reconnaissance.

Since 2006, Mike has volunteered with the Wounded Warrior Mentoring Program assisting veterans with employment searches, college admissions, obtaining security clearances and other needs for Marines wounded in Iraq and Afghanistan.

At THS, Mike was a prominent member of the 1962 Championship basketball team, scoring the winning points in the title game. He was a member of the Letterman’s Club and several service clubs. He has been a strong supporter of the THMS Badger Foundation and its activities including the Scholarship Endowment Fund and Golf Tournament. He was superb as keynote speaker at the commemorative brick dedication ceremony in 2021 held to honor THS graduates.