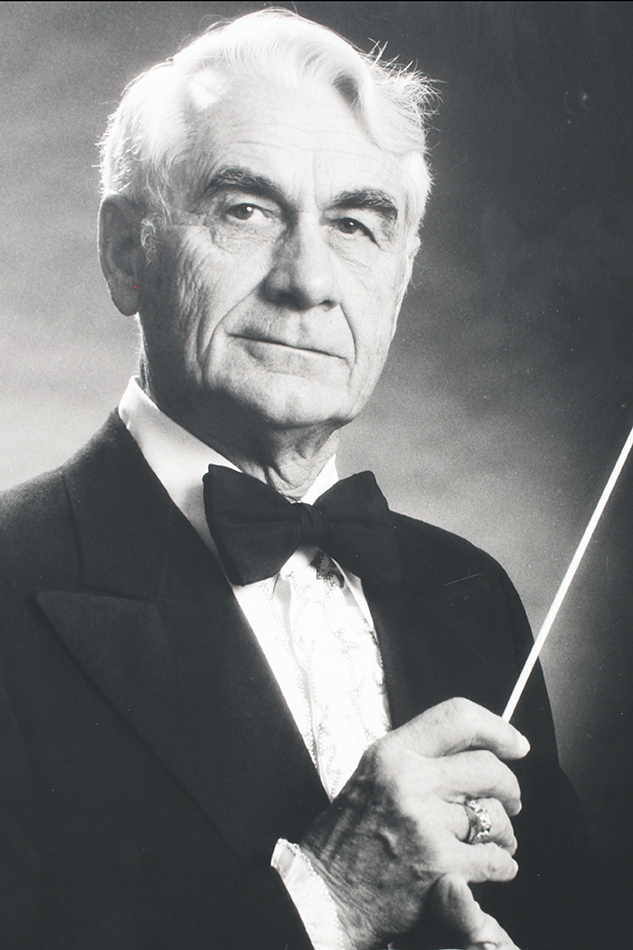 Bucky grew up in western Nebraska. He attended the United States Navy School of Music in Washington DC and was a member of the Nay Music Department. He received his bachelor’s degree at the University of Wyoming and taught there. He also taught at the University of Oregon where he earned his master’s. Head of the Fine Arts Department at Cottage Grove Union High School, he conducted the Symphonic City Band at Eugene and also the Roseburg Symphony.

At Tucson High as director of bands, he taught 250 to 300 students a day in his large and successful program. This included the marching band, famed throughout the Southwest as the “Marching 100,” the concert band, the symphonic band, and the dance band. All won honors each year during his 25 years of leadership. He brought many famous performers, composers, and clinicians to the school to help his students grow musically– Frank Simon, former solo cornet player in the John Philip Sousa Band; Louis Bellison, jazz drummer; Fred Hemke, saxophone virtuoso; Ulyssess Kay, composer and THS graduate in our Badger Hall of Fame; Don Ellis, jazz trumpeter. All his students gained a lifelong understanding and enjoyment of music; many student and practice teachers who worked under him have gone on to music as a career either in teaching or as performing artists.

In 1973 he became conductor of the Tucson Pops, retiring in 1997. These years saw the program grow from a series of four concerts a season to ten or eleven, with audiences growing from a few hundred up to the 8,000 or more who now cheer a performance. Jeanne did the announcing, often finding a local tie-in to a musical number. These concerts in Reid Park, “Music Under the Stars,” are one of Tucson’s important musical traditions.

He has had a long connection with the Flagstaff Festival of the Arts and summer music camps at NAU and the Arizona Orchestra Association. He is a board member of Arizona Young Audiences.

On the Rodeo Parade committee in various capacities for thirty years, he helps maintain the wide variety of harness– all the way from reins for one horse pulling a dainty buggy to that for teams on a stage coach or heavy hauler. He’s a docent at the Arizona-Sonora Desert Museum, has been with the Tucson Parks Foundation since its inception, volunteers with Mobile Meal. Jeanne and Bucky have three sons, Dr. Steve Steele of Normal, ILL, Chuck in Dos Cabezos, AZ, and Bruce in Fargo, ND. Thanks, Bucky, for all the good music . . . and all your good deeds!