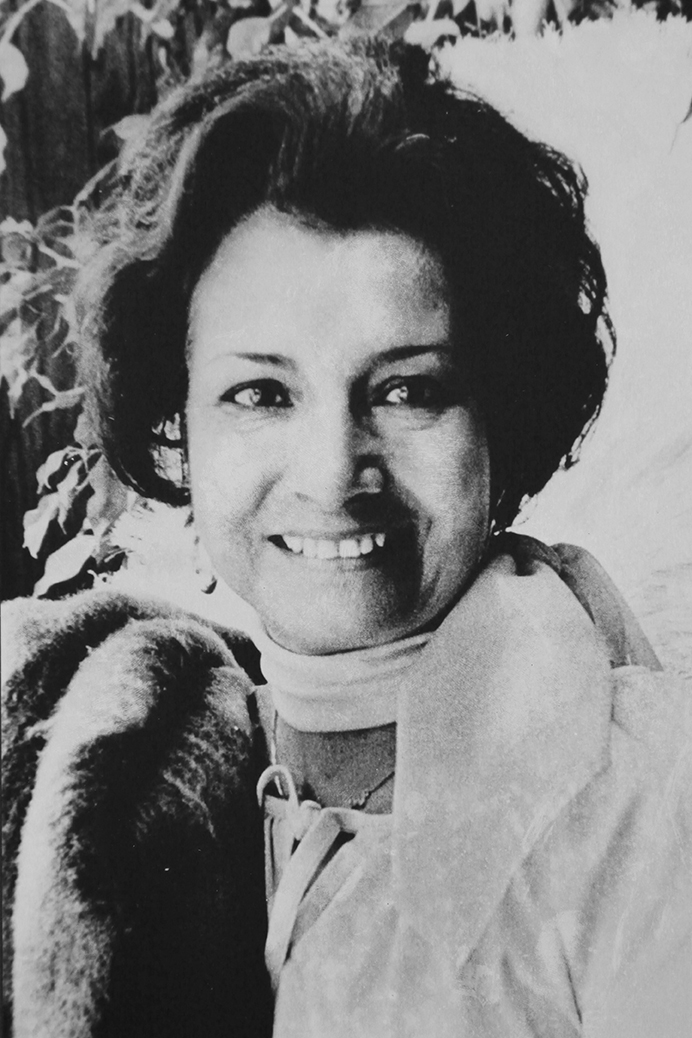 Received her Tucson education at Davis Elementary, Safford Junior High, Roskruge Junior High, and Tucson High Schools. After graduating from Tucson High in 1943, she was employed at the Davis Monthan Air Base for two years. Carmen moved to New Bedford, Massachusetts where she added Portuguese to her Spanish and English language skills. She later moved to Los Angeles where she managed a variety store concession stand prior to working for the phone company.
While working for Pacific Telephone, she discovered that she was “not too dumb to go to college”, as she put it. When asked what she was studying for, she answered, “To be a better educated person’, She joined the Secular Franciscans (The Third Order), participating in activities that developed into religious television programming. She counseled and taught religious education to youth detained in the Los Angeles Juvenile Hall. She held elected office in the Scot Club, a young adult social/benevolent club. This period in her life marked the beginning of a life-long process of balancing intellectual pursuits, personal growth and development, and service to others.
In 1962 she served as a Peace Corps volunteer in Columbia, South America. She trained for her work in Columbia throughout-bound survival courses in Puerto Rico, studies at the University of New Mexico and Columbia University, followed by supervised social work in Ney York City. In Columbia she was involved in community development in the City of Cucuta, living and working in an under-developed barrio. There she taught, organized community groups, provided counseling, and, using her public relations skills, promoted a better relationship between the local people and government officials. The Peace Corps experience gave Carmen inner strength and outer confidence. Her life’s goal became very clear, as she stated. To apply her “experience and education with the help of others for the progress of those in most need”.
After returning to the United States, Carmen became foster-mother to a displaced seventeen year old girl. She continued her volunteer activities, working with special needs teen aged girls as well the youth of her church. She also continued education. While employed full-time, she completed her Associate of Arts Degree at Compton College, and received her bachelor’s degree from California State University at Los Angeles. She worked at the Mexican American Opportunities Foundation as coordinator of basic education teaching English, Mexican American History, and career preparation. She also did job counseling with former offenders and recovering substance abusers. She continued with the Peace Corps, first as a recruiter at colleges and universities throughout the nation and then as a Director of Spanish-Surnamed Recruitment for both Peace Corps and VISTA. She returned to Pacific Telephone as an urban affairs representative and later as an executive-on-loan to the City of Los Angeles Bicentennial Committee. After retiring from the telephone company, she became certified as a paralegal professional and court translator. In addition, she worked as an associated to her church pastor in Lynwood, as a Personal Director for Credit Union in Downey, and as a paralegal for the Legal Aid Foundation in Compton. She continued her involvement with church, women’s management, and community groups.
Carmen believed that active participation in the community was both a right and a responsibility. She coordinated and implemented the Drew/King Cancer Prevention Program in the Southeastern area of Los Angeles County which provides free cancer examinations for low-income women. She was active as a volunteer in programs to study and combat liver disease and arthritis at USC/Los Angeles County Hospital and Rancho Los Amigos Hospital. Carmen conducted sample testing and mock interviews in high schools and skills centers to provide youth, particularly minority youth, with the necessary skills for job success. She was a consultant on Columbia Cultural Affairs for Peace Corps training in California State University as well as a consultant on Mexican American Affairs for the Temple City Unified School District. She played an instrumental role in program at L.T. Magee School in Pico Rivera which built a three room elementary school in Columbia.
In her private life, Carmen made charitable contributions in response to many appeals, visited the sick, counseled the unemployed, and was always available for family, friends, and neighbors. Her home was open to that special person in need. Whether it be a young nephew recuperating from a bone marrow transplant or a working woman temporarily seeking shelter or a young woman needing temporary distance from turbulent marriage. Her long-held goal led her life to find “those in most need”: a person with mental illness, crippled child who had become lost; an injured cyclist, the victim of a hit-and-run accident; a destitute family, facing Christmas with no Santa Claus; a frightened runaway teen aged girl in crowded bus terminal; a Vietnamese refugee family, abandoned on the sidewalk of the city; and many more.
Many of these works of compassion and caring were done in private and went unnoticed. Carmen Olguin was publicly honored for her many other achievements and contributions, however. Carmen’s energy and enthusiasm came for untiring spirit and were easily manifested in her warm sense of humor. The Tucson High School class reunions spotlighted and reconnected her to her growing up days in Arizona. She was looking forward to her fiftieth reunion in 1993. She died in June of 1990 in Lynwood, California. Carmen’s character gave purpose and meaning to her accomplishments as well to the lasting impact she left on others.