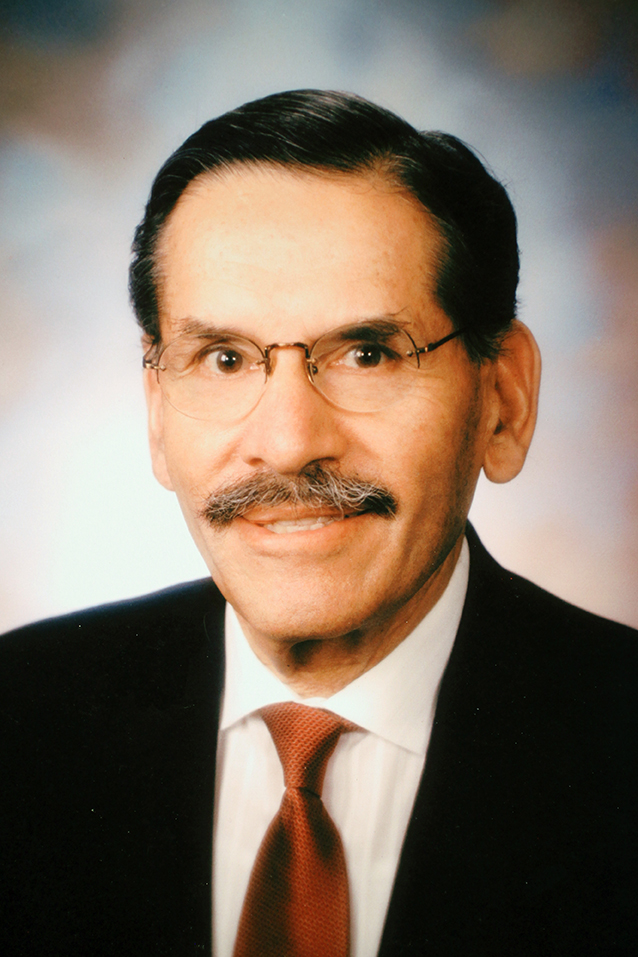 While a student at Tucson High, Carl E. Lopez was a very gifted athlete and was instrumental in helping THS win several State championships in baseball. He was offered a baseball scholarship by J.F. “Pop” McKale and went on to graduate from the University of Arizona with a Bachelor of Science in Education. He began his teaching career at Roskruge Junior High. Carl served in the U.S. Army, 82nd Airborne Division from 1950-1953 and then returned to teaching. In 1969, he made preparations to initiate bilingual instruction at Mission View and Drachman elementary schools. Dr. Robert Morrow recognized in Carl the potential to become an administrator for Tucson Unified School District and Carl went on to become an elementary and middle school principal. In 1971, Dr. Lee Starr handpicked Carl to be an assistant principal at Tucson High, a then highly troubled school. Together Carl and Dr. Starr reorganized the school and worked with the students and parents to return Tucson High to its rightful place in the community. Carl was appointed as Assistant Director of Personnel for TUSD from 1973-1977. The next four years, he served as the Director of Personnel. Just before retiring in 1983, he spent two years at Carson Junior High helping to initiate the middle school concept. From 1984-1986, Carl was the principal of Academia Cotopaxi High School in Quinto, Ecuador, South America. He also established Luz Academy of Tucson and was its first principal. Luz Social Services named him their “Administrator of the Year.” Carl has been a contributing member of the community in other areas. He was a consultant and trainer for the American Association of Retired People. He organized the Pima County Sports Hall of Fame Museum in Tucson, and was inducted into that Hall of Fame in 1994. He was elected President in 1995. Carl was a member of the committee for the celebration of Tucson’s birthday, Los Descendientes del Presidio Tucson 1995. He was a co-chairperson for the Committee for Recruitment, Registration, and Training of Volunteers for the 1997 National Senior Olympics in Tucson. He was an early board member of the Tucson High Badger Foundation and served as the Chairman of the THS Class of 1946 50th Reunion Committee. Carl and his wife, Emma, have been married for 50 years and they have seven children and thirteen grandchildren.