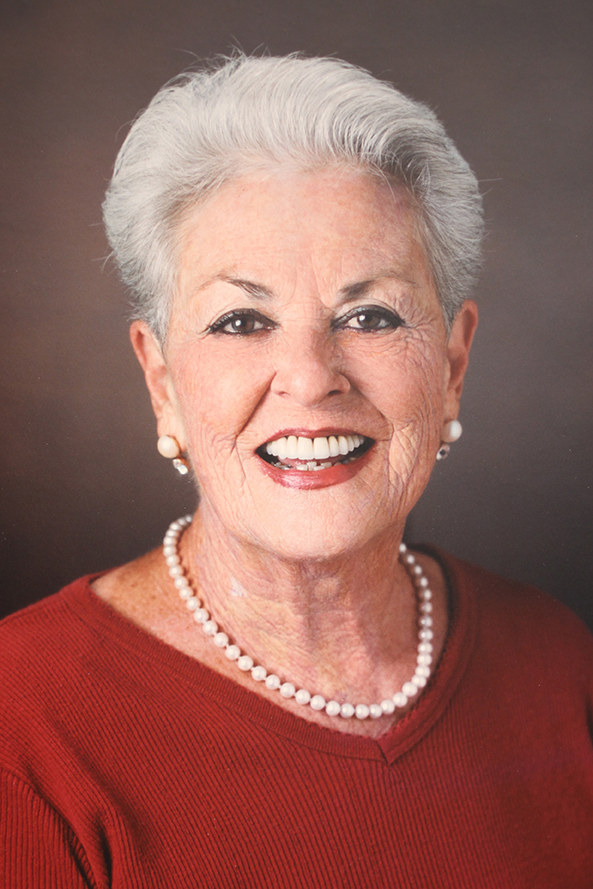 Was the first member of her family to go to a public school, thanks to gas rationing and World War II! Annie entered THS in 1944, graduating in 1947. She played string bass in the THS Symphony directed by Professor Sewell and continued playing in the Tucson Symphony for seven years.
Annie entered the U of A in 1947 hoping to major in Geology. She was told by the Dean that space was needed for returning GI’s and that the College of Mines was no place for a woman. Discouraged, Annie left the U of A to work for her father in Baffert-Leon Wholesale Grocery Co. She met Roy E. Laos who was working at this family’s Old Pueblo Transit Co. They married in 1952 when Roy graduated in Pharmacy for the U of A. Roy and Annie raised five boys, all went to Safford Elementary, Safford Junior High and THS. All have graduated from the U of A with professional degrees.
After moving to South Fourth Avenue in 1962, Annie was instrumental in the defeat of the Butterfield Freeway, a project scheduled to demolish many homes, schools and businesses in historic Tucson. In 1957 she founded the first historic neighborhood in Tucson and the second in the country. . . Armory Park Historic Residential District listed on the National Register of Historical Sites.
Annie has fought to improve the quality of education in barrio schools, saving both Safford Elementary and Middle School with dogged determination. She formed and implemented the Engineering/Technology curriculum that is in Safford today. Annie was a founder of the Tucson High Badger Foundation. She was an active member of the TUSD Facilities Utilization Committee as well as a member of the TUSD Bonds Committee. As a historical preservationist, Annie was invited to speak at St. John College at Cambridge University, England in 1992, on the topic of “Historical Preservation in Tucson.”
Annie spends her time now working at the Arizona Pharmacy founded in 1957, by Annie and husband, Roy. She is enjoying traveling, loving her children and grandchildren, and restoring her home built in 1897.