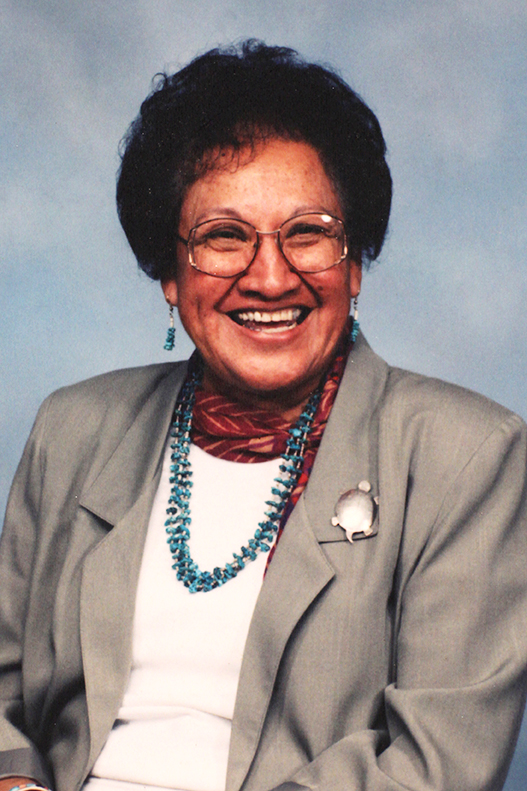 Alice Narcho Paul’s ties to Tucson High were established early when her father worked as a carpenter on the construction of the original building. As one of only two members of the Tohono O’odham Nation graduating in 1948, Alice achieved recognition in the fields of girls’ athletics and student publications; earning a letter and respect as a leader. She enrolled at the University of Arizona, but her ability to attend was postponed when her younger brother was in need of the family’s resources and there were no scholarships available at that time for students of Alice’s qualifications. Soon after, she was inducted into the US Navy, which allowed her to travel, receive training, and meet her husband, Richard Paul, of Indianapolis, Indiana. After their service obligations ended, the couple moved to Tucson where Alice cared for their growing family. Between the years of 1954 and 1978, Alice earned bachelor, master, and doctoral degrees at the U of A, all in Elementary Education with emphasis on Early Education. With these accomplishments, she became the first Tohono O’odham woman to achieve this distinction. The emergence of Head Start in Tucson in 1965 coincided with Dr. Paul’s education preparedness, and she became one of the program’s first teachers. Three years later, another federal initiative, Project Follow Through, was instituted through a U of A grant and Dr. Paul then began a 33-year association with the university as trainer, coordinator, and eventual head of that program. Though now retired, she continues as a classroom volunteer/presenter and as a member of the Board of Directors of the Child-Parent Centers. Although Dr. Paul has lived on Tucson’s south side for most of her life, her identity with and service to her roots are unquestionable. He Tohono O’odham responsibilities, evolving over the years, currently are as a consultant for tribal public schools and Head Start, Chair of the eight-member Board of Trustees of Tohono O’odham Community College, and member of the governing authority of the Desert Diamond Casino. She also serves as an education resource person on matters of native culture and on the Board of Directors of the Arizona State Museum. Dr. Paul’s lifelong religious community, Southside Presbyterian Church, has benefited greatly from her dedication and talents. She has served as local and district moderator and on two denomination-wide commissions: Preparation for Ministry and Reparation for Native Americans. Her ongoing involvement with her faith community remains central to her daily life. In addition to the recognition given her by the U of A, in 2001, Dr. Paul received the area YMCA’s “Woman on the Move” Lifetime Achievement Award. In October 2003, during her graduating class’s 55th reunion, her classmates honored her outstanding contributions to her profession, her Native American identity, and her religious affiliation and selected her as their nominee to the Tucson High Hall of Fame.