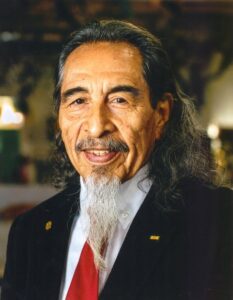 Alfred J. Quiroz was born in Tucson, AZ, on May 9, 1944. He attended Menlo Park and Borton Elementary, Safford Jr. High, and Tucson High School. He regularly decorated the halls of THS with themes relating to academics, athletics, dances, socials, and cultural festivities.

As a Navy Vietnam Veteran, he utilized the G.I. Bill to earn a Bachelor of Fine Arts in 1971 and a Master of Arts in Teaching at Rhode Island School of Design in Providence 1974. He completed his Master of Fine Arts at the University of Arizona in 1984. From 1985 – 1989, he taught art at schools in Tucson and throughout the state doing mural projects with children K-12. Three former students are currently teaching art at Tucson High School and others are teaching K-12 for TUSD. He is remarkable in encouraging students to remain in school by explaining the creation of art and relating it to intelligence.

Hired by the University of Arizona as Assistant Professor in 1989, Alfred was promoted to Associate Professor with tenure in 1993 and became a Full Professor in 1998. Alfred is the first Mexican America to obtain full professor status in the Art Department. He retired in 2018 and was awarded Emeritus status. Approximately 4,500 students attended his classes.

Awarded a Fulbright-Garcia Robles Grant part of the Fulbright Border Program in Mexico, 2003.

Directed 12 female students in completing the Phoenix Mars mural, a 60’ by 20’ exterior wall at the Planetary Laboratory Building.

His works were exhibited at Apex Gallery in New York, 2017, and internationally in Slovakia, Mexico, Spain, and China.

As a longtime professor at the University of Arizona School of Art, Professor Quiroz has left an indelible mark in the art world, drawing artists from all parts of the world to Tucson to view his work. However, the notoriety does not diminish his love of teaching to small groups of underprivileged children and university students striving to reach their full potential in art.