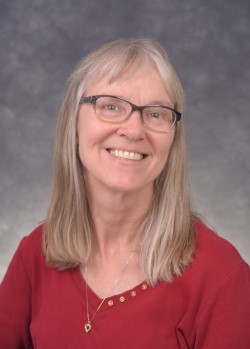 Lucy graduated in 1974, #4 in her class. She was involved in band all 4 years, played volleyball and participated in gymnastics.

Bucky Steele recommended that she study with his former clarinet teacher at the University of Oregon. She finished her music education degree at the University of Arizona in 1979 and did her student teaching with Bucky Steele. She got a Master’s degree in Clarinet performance from the University of Arizona in 1983. In college she was in the marching, pep, concert, and jazz bands. She was also in the orchestra where she played musical theater pit orchestra and opera orchestra. She plays professionally with the Southern Arizona Light Opera Company and the Arizona Opera. She has played bass clarinet in Arizona Symphonic Winds and principal clarinet in the Southern Arizona Symphony for over 30 years.

She started her teaching as the orchestra teacher at Alice Vail Middle school and 4 elementary schools. She concentrated on teaching strings and took viola lessons while getting her master’s so that she could be a better string teacher.

In 1984, she started teaching orchestra at Tucson High. There was only one class at the time. In 1987, she expanded to two classes, then four, and started teaching guitar. By 1991, she turned one of her guitar classes into the first mariachi class. The students named it “Rayos Del Sol”, a name that continues to this day. She became assistant band director in 2004. Former students Justin Enriquez and Cayce Miners are now the mariachi and orchestra teachers. In 2015 she was asked to become head band director. She was the first female band director in Tucson High’s history and the first female mariachi teacher in the city.

Her husband is Richard Noriega class of ’74 and his dad was in the class of ’49. Their son Thomas graduated in 2016, and James will graduate in 2019. They are a true Badger family.

Lucy takes pride in the fact that the Marching 100 has been in every Rodeo Parade since 1925. “Lucy continues to be a shining example of the best that Tucson High has to offer,” wrote Justin Enriquez former student and current Mariachi teacher at Tucson High.